We left the hotel early today to be at the embassy for an 8AM soundcheck.
The program was for music students from the Dom Bosco School. They also got set up and were prepared to play some pieces for us. At 9 the program began outside in the embassy courtyard with some short speeches. The speakers were Ambassador McMullen, Padre Marcelo from the Dom Bosco School and Manuel “Phil” Mungongo, Embassy Press Specialist.

We talked to the school music director beforehand to see what he wanted to do and arranged an ad hoc program. When the speeches were over we played two songs, the second of which was our blues, On the Blue Line. Next the kids played four songs for us including Ode to Joy as a piano feature. The other songs were more African in style. We workshopped the blues with them but they were by far the most timid group that we’ve worked with so far on this tour. I don’t know if the timidity was partially a language or cultural issue, but it was strikingly different from what we’d experienced in South Africa. The workshop still was fine, since we don’t 100% participation for it to be successful, it’s just better. 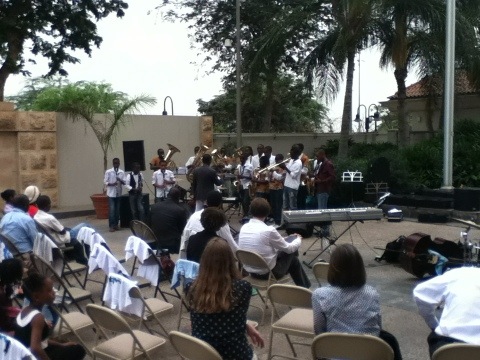 We ended with a jam session by offering to playing with the kids. I fully expected them to play some local music, but they played Glory, Glory, Hallelujah and Auld Lang Syne and we all played along adding some improv to their arrangements. To close we played Bebop and with the help of a translator answered a few final questions.