Today we drove about 200 kilometers from our swank digs near Joberg to do a workshop at Lebone II High School in Rustenburg. The school’s artfully designed campus includes a central, amphitheater styled outdoor space, library, music room, a beautiful cafeteria with excellent food, and all the facilities we would expect in a “western” school, such as soap, and hot and cold running water in clean bathrooms (not to be taken for granted in many of Africa’s rural schools). The student body is integrated, both racially and socio-economically, and there are two dorms to house the kids that don’t commute.

The school is the vision of Kgosi (chief, or king) Laruo and was built on the side of a mountain belonging to his Bafokeng tribe. They were able to reclaim their land after apartied ended and, amazingly, fought for and won rights to the platinum mines within their boundaries. Unlike most of the world’s leaders, the chief lives in a fairly humble home and has applied the wealth from platinum to developing programs for his people, with special focus on education. The school stands as a model for education in South Africa, as does his leadership. 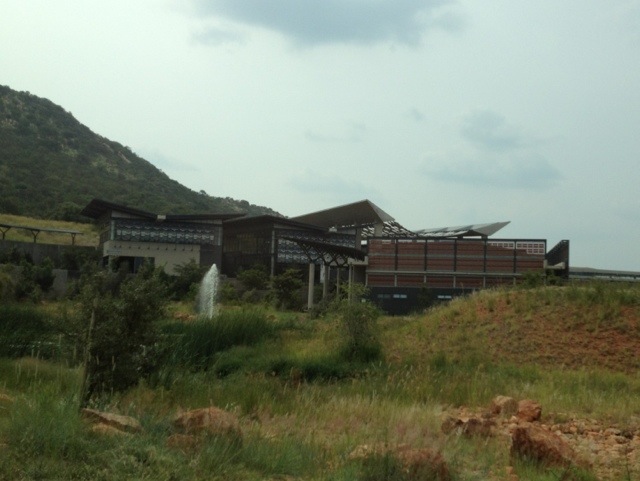 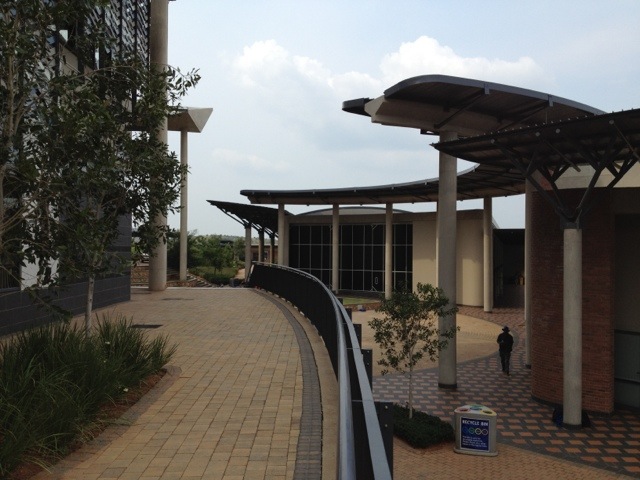 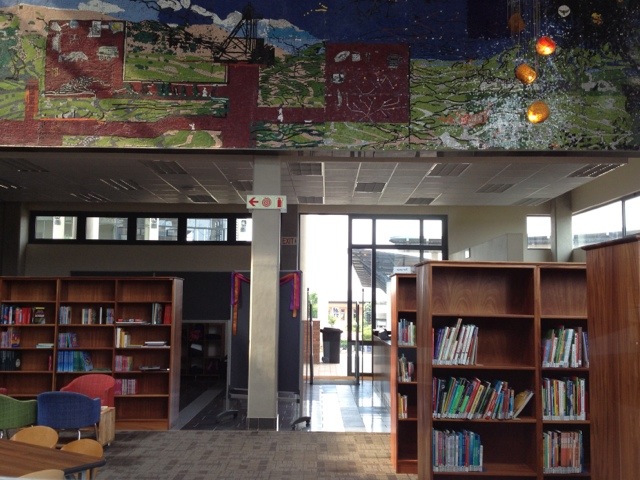 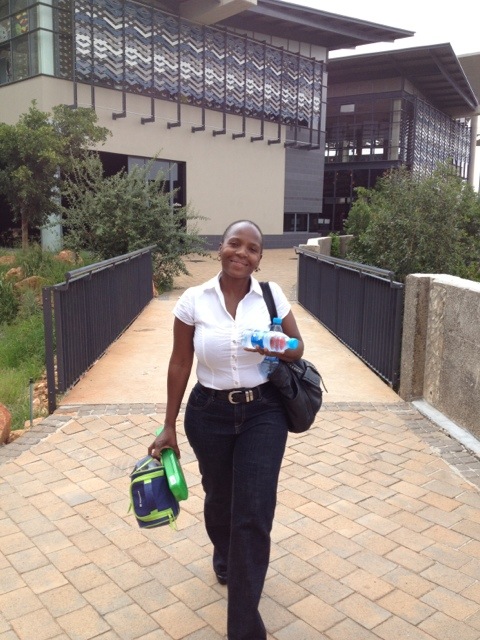 The students here, ranging from beginners to those with a few years experience, were especially enthusiastic about jazz. We did our thang, then listened to them play one of their songs, and finally came together for a New Apartment Lounge style jam on the blues. There must’ve been 16 kids playing including a couple violinists! 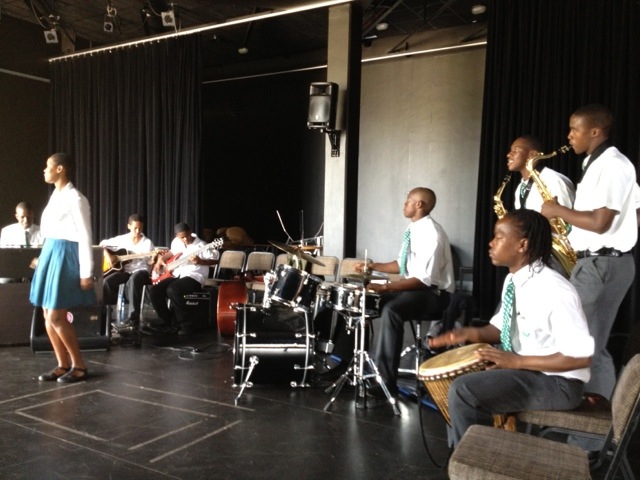 The rugged mountains in, and around, Cape Town are spectacular. From our hotel we have a view of Table Mountain, which is often covered in clouds referred to as the table cloth. Here is a picture of the rock from my room on a perfectly clear day. 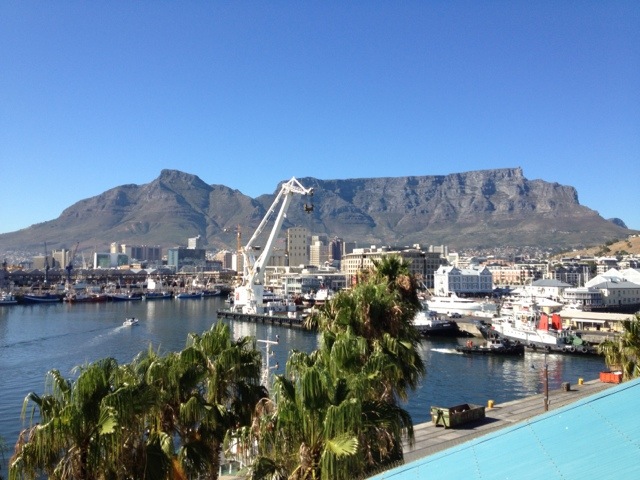 This photo of Lion’s Head was taken from the television studio where we played on the morning show, Expresso. 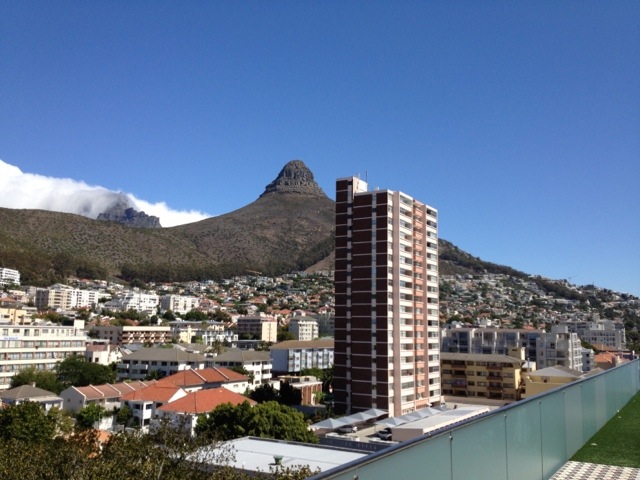 One of the guys at the studio said it was a nice hike/climb to the top so I decided to make the trip on our day off. I was sorry I couldn’t join the rest of the gang as they went down the coast to see penguins, but the climb was fantastic–mostly hiking with a few vertical portions made easy with chains and other permanent devices. I was joined by a couple new friends made at the Mahagony Room gig on the previous night. We hung out a little too long on the top, in midday sun, enjoying the views and watching people parasail, and I’m pretty crispy as a result. 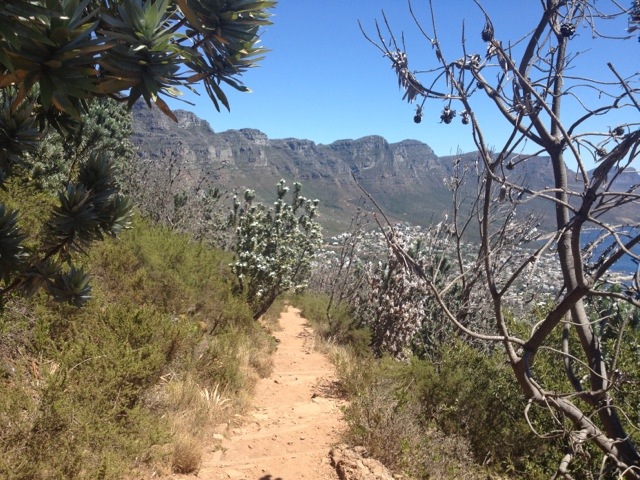 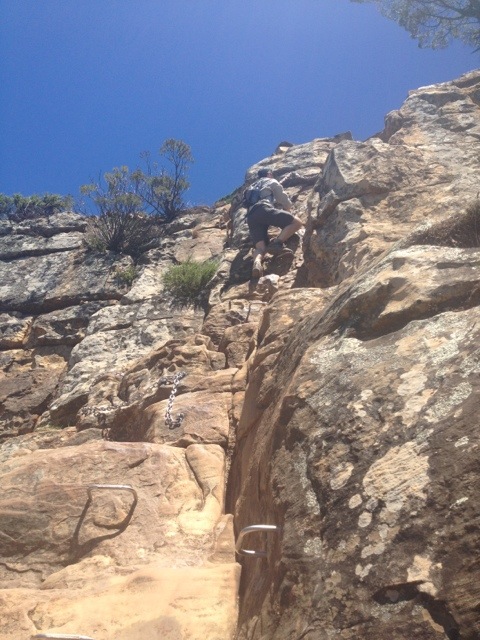 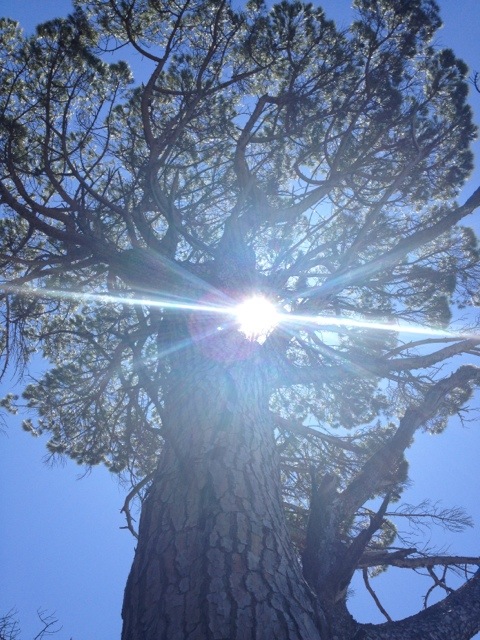 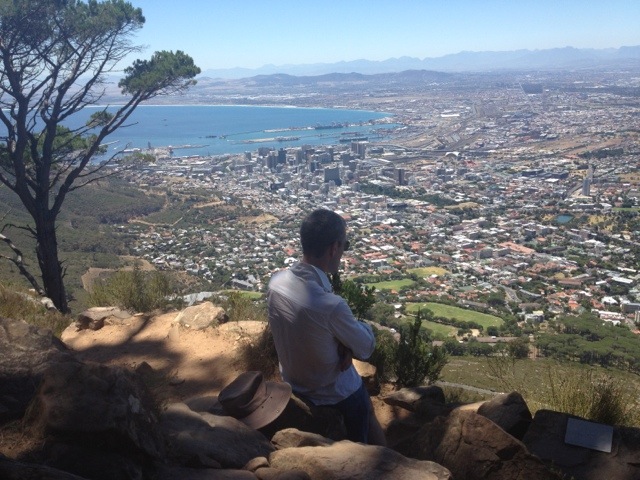 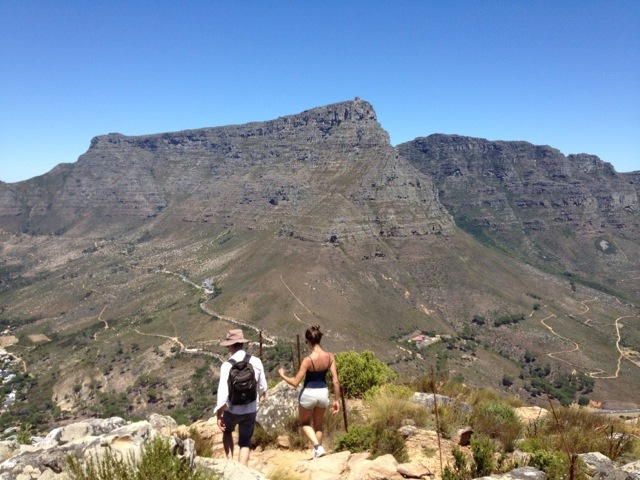 We are half way through our tour of Africa. We have done several interviews along the way and two similar, commonly asked questions are, “what is your impression of the musicians in Zim (or Malawi)?” and “what can you take from the musicians here?”

The obvious answer to the second question for me, and I imagine most musicians, is rhythm. This is the land of rhythm! Drumming and singing are an integral part of African history and the foundation of the styles of music I love most, jazz, samba, and Afro-Cuban (not to mention James Brown). The grooves I heard in Zimbabwe are different from what I’ve heard (on recordings) from west Africa. There is a different lilt in the triplet and the hi hat and the rhythm guitar lines often give the feeling that the middle note of the triplet is the down beat. Twice during long car rides in Zimbabwe when the radio was turned on in the middle of a song (and not loud enough to hear the bass), I found myself hearing the downbeat in the wrong place. Or at least the wrong place according to western written music.

Steve Coleman once told me the first time he went to Cuba and asked a musician where 1 was, while listening to some folkloric drumming, the guy replied, “it’s anywhere you want it to be.” It is the same case with African music. The rhythmic patterns are heard as a whole with less emphasis on downbeats and more emphasis on how they lock into the other parts being played. That’s something I need to work on.

While the rhythms here are inspiring, the biggest impression, and the element that I would most like to influence my playing, is the joy with which the musicians here share their music. This can be found in jazz–Billy Higgins, Joey Baron come to mind–but here it seems to be the norm and it is given generously.

Attached are some shakey clips taken with an iPhone that show both the joy and the groove.

This is from one of the songs the students at Zimbabwe College of Music played for us:

At Zimbabwe Broadcasting Corporation with Dennis waiting for a live interview with Terrence Mapurisana on his “jazz show”. It’s FM 92.85 for those of u back in the states with a very large antenna.
We’re told it’s a popular show and we’re hoping to get more awareness for the workshops and concerts over the next few days. We also did interviews with several print media groups before heading over here.
We have a very busy schedule in Zimbabwe and, based on what we’ve been told by our friends in the Ryan Cohan Quartet, who were here in 2008, we expect to meet some great musicians.

One of the best things about our tour of Africa is that WE’RE IN AFRICA! For as long as I can remember I have wanted to come here to see the animals and today we took a drive through Lake Chivero Wildlife Park with the hopes of doing just that. Things started slowly–we spotted some monkeys on the way into the park, some road runners, and then nothing for a while aside from rocks or tree stumps that we mistook for animals. On one such occasion I turned around to reach for a water and saw a baboon strutting along the tall grass. After straining to see him in the bush, we drove for a half hour along the bumpy dirt road misidentifying inanimate objects until our host, Jillian spotted zebras in the distance! It is hard to see their stripes from far off because the intense African sun reflects so brightly off the white in their hides that they seem to glow.

There is such a thrill in looking for animals in the wild, not knowing if you’ll see any at all and feeling so lucky when you do. It wasn’t long after that we found a couple warthogs and then a huge white rhino! We eventually came to a point in the road where half a dozen zebras were grazing along side wildebeest, impalas, and some other sort of large deer. We stopped for lunch at the lake and saw rock art and dozens of lizards.

On the way out of the park a couple of cars were stopped on the road and we realized that an enormous rhino was grazing only a few meters from the road. What a prehistoric beast! I think drivers were stopped to look, but also reluctant to pass seeing how the rhino was facing the road and bigger than the cars they were driving! We saw several more baboons on the drive out, as well as guinea fowl and more monkeys. It was an awesome experience. 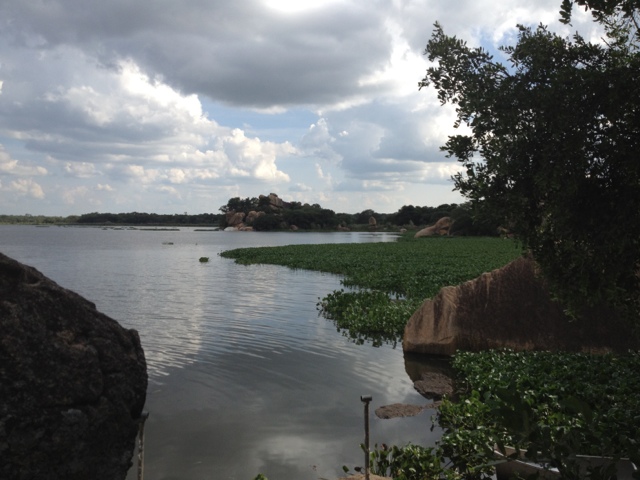 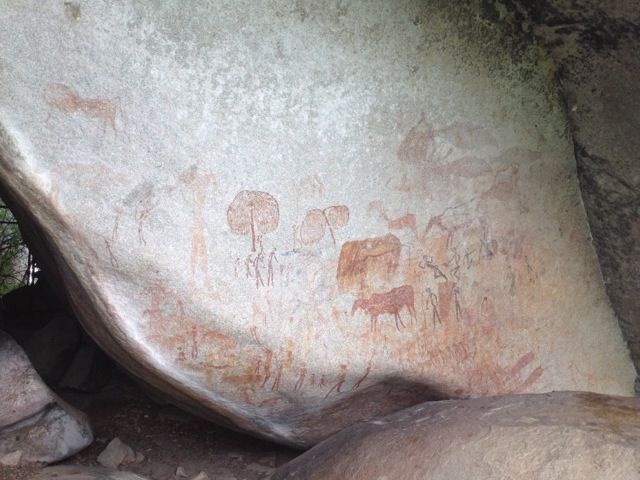 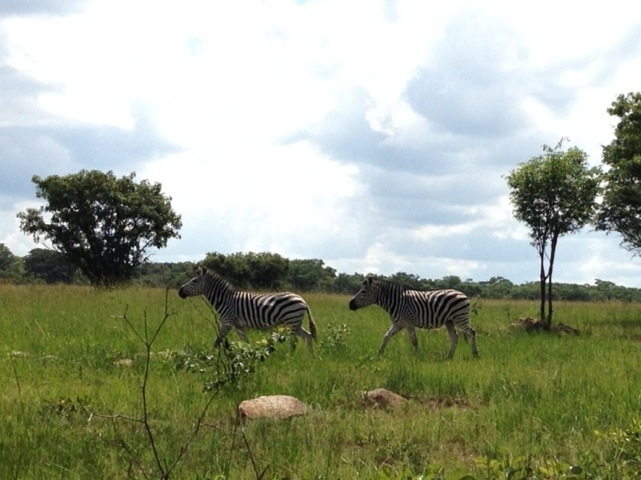 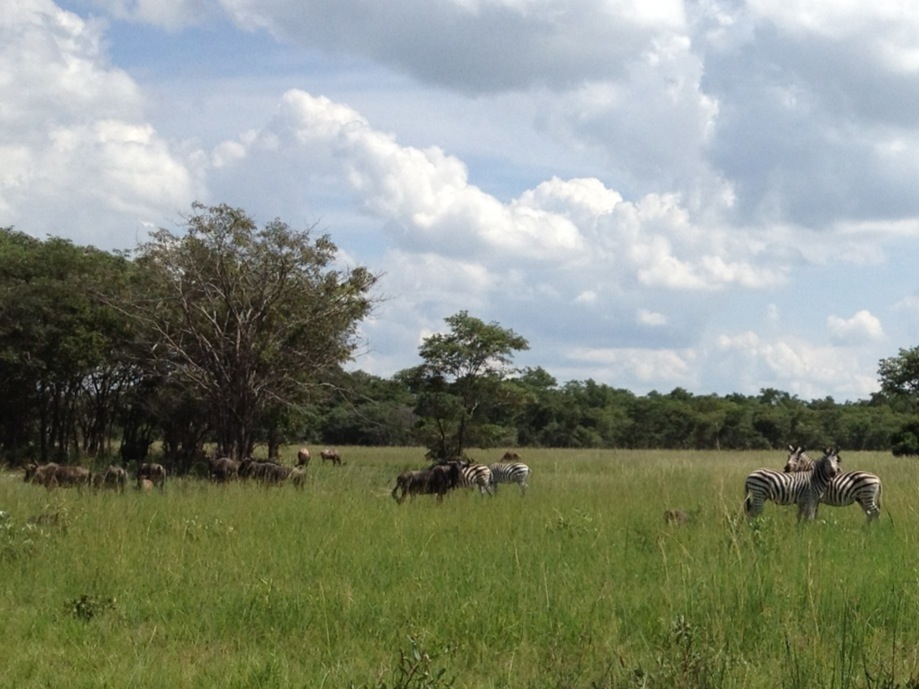 Our time in Malawi has truly been a wonderful experience on many levels. Today, our final day here, we traveled from Blantyre to Zomba to work with a group of music students at Chancellor College. Once again, we were met with great enthusiasm. This hunger and excitement for something new has been consistent througout all of our travels here in Malawi and will never cease to amaze me. The students gladly participated in all of the activities during our workshop as we introduced them to a few elements of jazz and blues. Using our voices, we learned a basic 12-bar blues form, sang “Bag’s Groove”, worked on call-and-response, and even had a few people take entire solos. They picked up everything so fast!! I believe that this introduction to jazz really inspired a lot of the students. They all had many specific questions concerning various aspects of this great music. So far, this trip is reinforcing that fact that music can unite people faster than any other language, even if you aren’t familiar with a certain style or form. I’m looking forward to our next destination, Zimbabwe. Will the people we meet be equally excited about learning something new as the people of Malawi have been? We’ll keep you posted. Until next time, take care.

We drove from Lilongwe to Blantyre today and the countryside was especially lush after heavy rains. Malawi is full of life, people everywhere–walking, riding or pushing bikes loaded with firewood for cooking, selling mangos along the side of the road, tending goats, farming. Nearly 90% of the population practices subsistence farming so the landscape includes a patchwork of small corn fields. Regardless of slope or soil conditions, the people make it work. Corn flour is used to make a staple dish called nsima, which I had my first helping of for dinner–grits, basically.

Yesterday we gave our first workshop in Malawi to a group of about 20 musicians. We were told that people would be reserved, but found them to be extremely open and enthusiastic. We played and talked a bit about what we’re doing and then they sang and played one of their songs. Their music was beautiful and the expression on their faces as they performed was pure joy. Even when we played I would look up and see these huge, unreserved smiles and begin smiling myself.

Resources are scarce here. We brought some guitar and bass strings and drum sticks, etc., but I wish we could have brought more. Much thanks to all the musicians back in Chi and Detroit who contributed.

This is getting long so I won’t go into detail about last night’s concert at the Ambassador’s residence, but it was a blast and I’m psyched to be playing with these fantastic musicians for the next month!

ps. pictures coming when we get to faster internet… 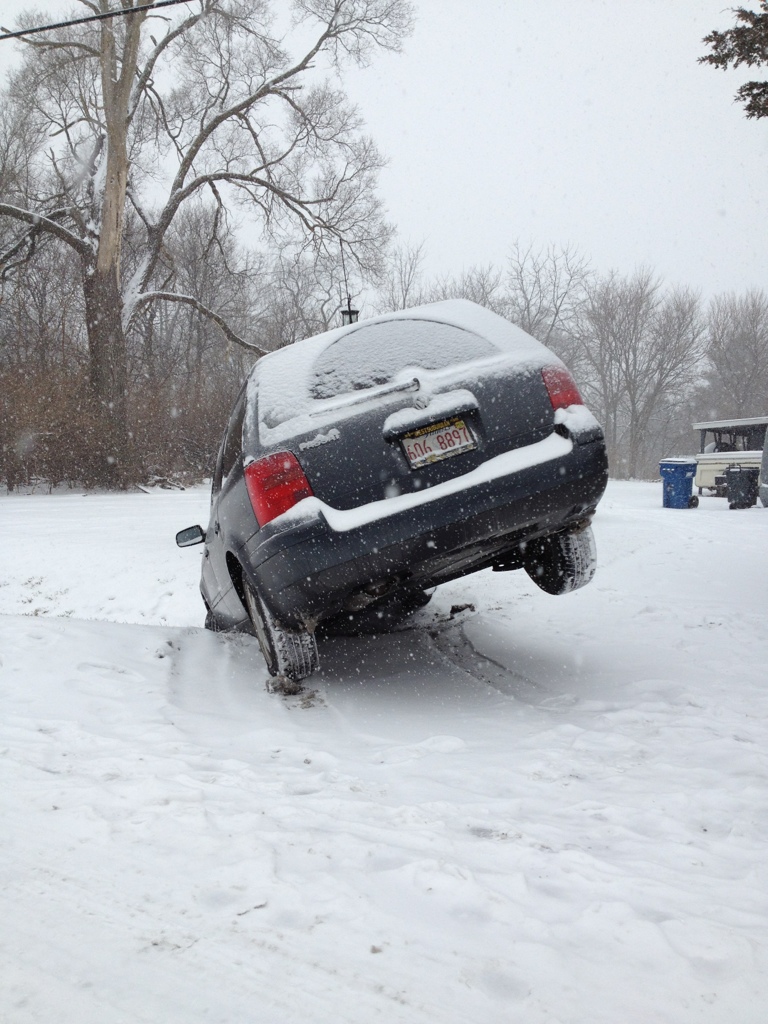 No easy task getting out of Chi. Here’s a little pic of my car taken yesterday. No damage, just a bit of a hassle. I’m guessing this will be the only snowy photo on this blog. Next entry should be from South Africa or Malawi! Peace and joy, Michael

The band takes off for Malawi, Zimbabwe, South Africa and Angola in late January. We can’t wait to get started!

Welcome to the website for the Dennis Luxion + Michael Raynor Quartet! We’ll be posting here during our travels throughout Africa and the United States in early 2012. Use the player in the sidebar to hear samples from our upcoming record. Enjoy!